Glengarriff has been a renowned destination for the discerning tourist for over one hundred and fifty years.

With its spectacular scenery, dramatic history and relaxed people, Glengarriff is seen by many to exemplify the attractions of Ireland’s beautiful Southwest and is popular with domestic as well as international visitors.

An exceptionally mild climate due to the benign warming waters of the Gulf Stream encourages the luxuriant plant life for which the area is famous and with the rugged Caha Mountains sweeping down to the sea, the scenery is breathtaking.

Glengarriff village, known as the gateway to the Beara Peninsula, is a lively and picturesque spot with a selection of restaurants, food shops, craft shops, an art gallery and of course many friendly pubs in which to enjoy a drink, meet the locals or take in a night of traditional music.

Garnish Island, famed for its subtropical gardens, is only a short ferry ride from the village but with its tree ferns and giant eucalyptus can feel like a different continent. Further afield, there are many market towns and traditional fishing villages which seem to have entirely escaped the commercialism and over-development of other regions and make for interesting and varied day trips.

West Cork has developed a well-deserved reputation among food lovers, both for its restaurants and for its wide diversity of locally produced artisan foods many of which are available at the thriving farmers’ markets.

Glengarriff is ideally situated for those who wish to explore the magnificent Ring of Beara, the Ring of Kerry or other less well-known touring routes.

The picturesque towns of Kinsale and Killarney are within easy driving distance.

Several golf courses are nearby and there is a wide selection of recreational activities available throughout West Cork: excellent fishing, sailing, hill walking, whale watching, surfing, canoeing, cycling and pony trekking are all easily arranged in the locality.

The setting of Glengarriff Woods is spectacular, with the forest nestled in a sheltered glen which opens out into Glengarriff Harbour with its many inlets and islands.

Above the woods rise the imposing Caha Mountains, with their dramatic sandstone outcrops forming the border between counties Cork and Kerry.

The woods themselves are a remnant of the ancient Irish oak forests and are considered to be second only in importance to the Killarney oakwoods.

Bare rock erupts everywhere, often with ancient trees clinging on, seemingly without the need for much soil. There are healthy populations of red squirrels, deer and otters as well as many other animals and birds.

A profusion of ferns, mosses, lichens and orchids are testament to both the clean air and the moist, warm nature of the climate produced by the Gulf Stream current. 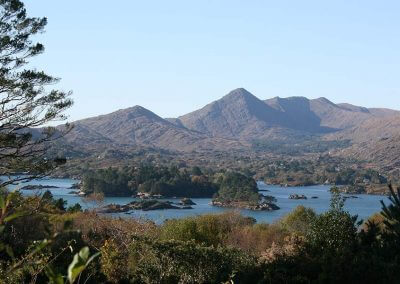 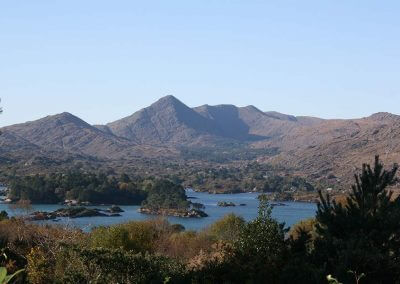 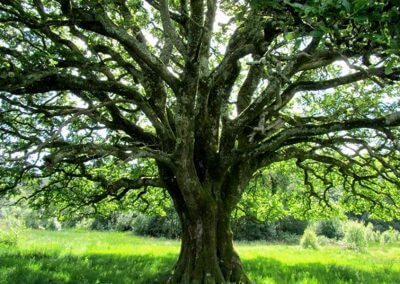