History Of The Lodge

In the early years of the nineteenth century, it became fashionable for wealthy landowners to create romantic retreats, conjuring up ideas of the rustic idyll and often inspired by travel to the far-flung wildernesses of North America or the Orient.

The First Earl of Bantry, having searched over his extensive lands, settled on a particular stretch of the Glengarriff River as offering the most picturesque possibilities. He had the river diverted and embanked to create an island and proceeded to create his fantastic balconied lodge where he entertained both grand and famous visitors.

The extensive woodlands were well stocked with game and exotic birds and a small herd of bison was imported from America, to add to the effect. Although most of his architectural fantasy was later destroyed by fire, the location remains as magical as ever. The house has been rebuilt; is still thatched ; and is now a great deal more comfortable than Lord Bantry was able to achieve, even with an army of servants.

The Earl’s choice of site was certainly well received at the time, enchanting visitors such as Wordsworth and Thackeray. The latter, having travelled the “beautiful road to the cottage and park of Lord Bantry”, was much impressed by the “exceedingly wild and picturesque demesne”.

Prince Puckler Muskau, who stayed at Glengarriff Lodge in the summer of 1828, found it “invented for romance” while the Halls, regular guests at The Lodge, described “trees of the most luxuriant growth surrounding the house which was sheltered like a wrens nest in its little island”.

Lady Hall continues: “after crossing another bridge one is invited to ascend a soft and gentle looking hill which commanded a scene fit to illustrate The Happy Valley; nothing could be more delicious, more varied, more enchanting than the panoramic view, a view of such luxuriance that painters there might study nature under every shade and form”.

A private zoo of sorts was established: there are reports of a team of zebras being driven around the demesne and aviaries filled with exotic birds. Visitors continued to flock to The Lodge, which came to be seen as a prime example of the picturesque shooting lodge.

Following the death of the second Earl, a period of decline and neglect followed, which coincided with a troubled period in Irish history and a decline in the fortunes of the Bantry Estates.

The Lodge remained widely admired throughout this long period of decline but few resources were made available for the increasingly large task of restoration. The encroachment of Rhododendron Ponticum, a large “shrub” introduced for its luxuriant cover and bright flowers, was becoming a major problem and the river embankments fell into disrepair.

Eventually in the 1940s Lord Bantry’s descendants decided to sell The Lodge and some fifty acres to a retired army officer, while the majority of the wooded demesne was transferred to the Irish State and is now maintained as one of Ireland’s most significant nature reserves.

The next phase of the estate began under a cloud, the new owner enthusiastically ploughed much of his savings into his retirement project but was dealt a severe blow in the form of a fire, which all but devastated the newly-restored Lodge and, by all accounts, the morale of its owner.

The Lodge was then rebuilt, incorporating the original stonework, but was quite different in style and was soon placed on the market by an exhausted owner. The Lodge came into its present ownership in the late 1960s and was used primarily as a holiday home where three generations of the family had many happy vacations, initially just exploring the increasingly overgrown estate.

In the early 1990s it finally became possible to undertake substantial improvements and we began to clear the woodland and gardens of the Rhododendron, which had made the estate impassable and had all but stifled other plant growth. With this impenetrable woody blanket removed, it became possible to appreciate the original features and ideas which had impressed so many in the past. Some of these features were restored, some were beyond repair and were removed and some new elements were added. Many trees were retained that were not part of the original planting scheme and some were removed that were.

A new arboretum has been planted and the gardens are being restocked. All in all the restoration has been inspired by a sense of loyalty to the guiding ideas of its original creators.

We hope that, in time, Glengarriff Lodge will be known again as a place apart, where nature and imagination meet freely and visitors long to return. 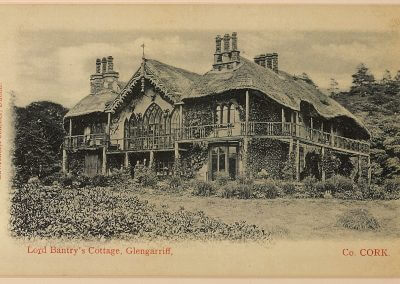 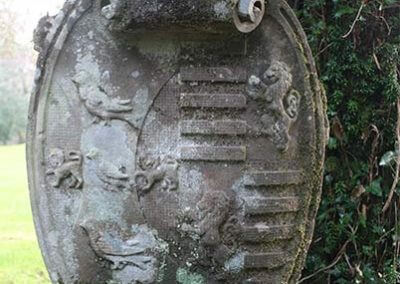